Just a small update on the dollies 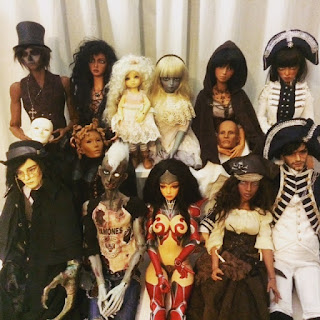 •••• Jules (not present in the photo as she is on vacation): Lillycat Ellana in grey. She is my newest doll, and I haven't had time to do anything to her yet. She is the second fate (Elliot is the first, Jules the second, and 'Popodoll Ramiel' will be the third when he arrives).
From top to down and from left to right (a * indicates this is just a head):
•••• Voodoo: Fifth Motif Venitu in Honey Caramel Brown. Arrived in May. I have to heads for him; one is his voodoo-magic head and the other is his 'normal' head. He dates Scorpio. He is still a WIP!


•••• Henry: Soom Bix hybrid on Ringdoll RGM-4 in NS. I changed his original body for the body Joker arrived with. I don't like the old Soom bodies, so I was happy to change Bix to this body.


•••• Scorpio: Elfdoll Vivien hybrid on Soom Vesuvia body. The head is heavily blushed to match. I've had many different versions of Elfdoll Vivien, but Scorpio is probably my favorite as all the things that frustrated me with the other Viviens has been taken care of here. She dates Voodoo.


•••• Snakey*: Simply Divine Medusa Valentina Head in Cinnamon Tan. She is a WIP. I hope to get her a Dollshe girl body in Pale Tan.


•••• Zombie: Ringdoll Zombie Sol in grey skin. He has been with my for years now. Zombie's sister is Elsa Maria. WIP as he has new hands that must be painted. I just made him a new wig so now I just need to paint his new fancy hands.


•••• Elliot: Volks YoTenshi Yuh in NS. The doll I have had for the longest time. She is my only non-SD doll. I've considered selling her before but I can't do it, and now I finally have a character for her that fits with my other dolls. She is the first Fate.


•••• Elsa Maria: Peakswoods open eye Dlight in grey skin. She is a one-off from Peakswoods from December last year. I just fell in love with her color when I saw it, and I knew I had to have her.


•••• Cyborg: Iplehouse Cyborg Bianca in peach gold. I think she's a very interesting doll. She is a WIP.
(Voodoo, Henry, Scorpio, Zombie, Snakey, and Cyborg are my Freaks. Also is this universe is Elliot as a the first Fate, Jules as the second Fate, and Elsa Maria as Zombie's sister. This universe is very open and I can always fit in a new doll/character)


•••• Sparrow / Xiomara: Elfdoll Ruru hybrid on Volks SD16 body in ebony. She is good friends with Alonso. Still a WIP. I've changed Sparrow's character a few times but now I'm happy with the character and I can start to 'make' her come alive.


•••• Alonso*: Granado Mads in bronze. Good friends with Sparrow. Enemies with Morgan, Marina, and Nathaniel. Also still a WIP. I hope to find a proper body for him soon.


•••• Morgan: Twigling Ylisande hybrid on Iplehouse nYID body in light brown. Dating Nathaniel. Ylisande has been a dream doll of mine for a long time, and finally I was able to have one myself.


•••• Marina: Volks SD16 Ruby in ebony. She's friends with Nathaniel. Also still a WIP. Ruby was the first Volks doll I really loved but it was very difficult to get one. Her charecter


•••• Nathaniel: Iplehouse Rex in real skin. He's one of the auction dolls from Iplehouse so he was pretty cheap to get. He's dating Morgan and good friends with Marina. Enemy of Alonso.
(Sparrow, Alonso, Morgan, Marina, and Nathaniel are in my Pirates-universe)

And currently I'm waiting for two dolls;
Twigling Khalo in vivid skin from the long preorder. She is part of a trade between my friend Lise and me. I plan to use her in the pirates universe.
Popodoll Ramiel in tan. I bough him from the agent on Ebay. Expected shipping is January/ February. He will be the third Fate in my Freaks universe.

Should I do a blog to explain who and what the Fates are? I can't decide if I should do it before I have Ramiel home.
Indsendt af HappyCatTaxi kl. 11.05