Making Ruby siblings; Marina and Marius
Deciding Marina should no longer be the Commodore I needed something else for her, and I decided on giving her a brother...
I have a Volks SD16 Ruby girl but I want a boy too. First, is getting one more Ruby head and then getting a Ringdoll RGM-4 body in tan to match.
First step was actually very easy; I decided on getting Ruby siblings a week ago, and when I went on DoA there was a Ruby head for sale. Nice and easy.
Second step was also easy; I knew I wanted a RGM-4 body in tan from this year because I knew that would match very well. So I looked on DoA and there was one. I asked to buy it on a layaway, and that was fine.
I'm surprised by how easy it was to find the head and body to make a Ruby boy. And I'm surprised it did not cost more ($700 total for head and body, which is a lot of money but it's less than I feared).
Here is a pretend picture, with Marina as both herself and her brother Marius. As Marius she is on a RGM-4 body in NS, but I know Ringdoll tan is a good match for Volks ebony. The height difference will be about 4cm, I assume. 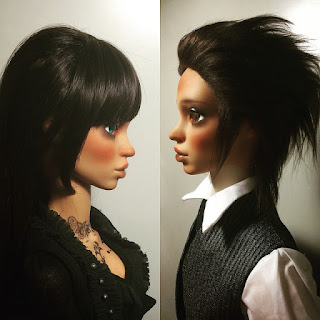