Elliot is also known as the Creator. She is the first Fate, and was created long before the other Fates. At the time of her creation she was supposed to be the only Fate.

Many thusands of years ago the five Dudali (the humany subspecies) fought each other in the First Great War. Creator was the only Fate then, and she was nearly destroyed trying to do all the work and keep the Dudali from murdering each other.
After the First Great War, Sky Man and Sky Woman decided to make the other two Fates.
Because Creator was the first Fate she has powers that the others do not. She can do their work. She can keep Earth Kingdom running by herself whereas the other two cannot. They have specific work and can only do that.

Creator also has the ability to call forth the Guardian. I have a few ideas about the Guardian, but I have not decided completely, so it might change a bit later on....: Creator can turn into the Guardian. I know the Guardian was made to be used if for some reason the Earth is under attack that will result in death of everyone. Creator has direct control, and can use the Guardian whenever she wants. She doesn't do it often and last time in the First Great War.

Creator looks like a little girl, but do not mistake her for a little girl. She is many thousands of years old. She looks young because she rarely goes to Earth (the divine beings and the fates are all immortal, but they slowly turn mortal and age when they are on Earth).
As the Guardian she grows bigger and has a big sword and shield. The sword to fight the evil and the shield to protect the people.

She's seen destruction and war, but also peace and prosperity. Her main work is to create the fates (fates as in lives) of the Dudalis. She is also the most cynical of the Fates because she does not understand emotions.

Her title is the Creator of Life and Death, because not only does she create the lives, but she's also the one who decides the length of each life.

This is Creator; Volks YoTenshi Yuh. The doll look only very little like the idea I have in my mind, but I love this doll so much that the image in my head has changed to fit this girl. 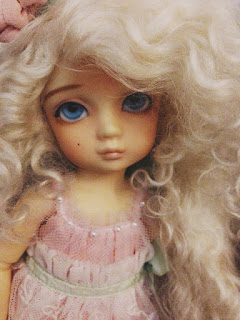 Yuh is my only non-SD doll. Her size is all wrong and she does not look that much like Creator, but she's still kinda perfect for the role.
Indsendt af bjdzen kl. 00.08