As some of you might remember Voodoo’s real name is Jude Effrayant, but though I knew his name the rest of his story was something he didn’t feel like sharing. I have only recently realised who Voodoo is, so even though I know a lot about him now his story is still a big WIP. Certain elements of his story changes how the fellowship (how the Freaks come together) is formed because Voodoo is on a mission, and therefore he can’t meet the others in the fellowship too soon.


Jude was born as a wizard, but he was not very strong or very brave. Actually he was a scrawny guy with only a modicum of magical power. He would use his magic to help others for smaller problems. This way he could get by and find work. He was never popular, but he could get by. He met and married a local girl, and they settled in a little house in a little village. They didn’t have much but they got by and they were happy. Then tragedy struck and his wife and daughter died in childbirth. His magic was not powerful enough to save them.  He was completely crushed and withdrew into himself. The people in the village looked upon him as a person of bad luck, and left him alone for a while but then the mocking, bullying, and the attacks started.


Finally, he had had enough and he decided to go to the extremes to have enough power to fight his enemies and gain the respect he had always wanted but never had. He called forth Khaos and got all the powers he could possible ever want in exchange for his memories. When he woke he had no memories of his life, but he had powers and a burning wish to be the greatest wizard ever. He moved across the country, settled into a castle while he honed his powers. Over the years he learned to use his new powers and he became more powerful than his enemies, but with his memories gone he had no one to prove himself to and no one to seek revenge on, so he worked to be more powerful. Power was the only thing he wanted and needed.


People from every Dudali species came to him for help. He was rich, powerful, and feared. He was so feared that only very few dared to approach him for help, and he would help them only for a price, a price so high it was only the most desperate who would pay.


One day a girl sought his help, but he turned her away. He didn’t have the time and he knew she could not pay his price. But when he touched her wrist to throw her out, he experienced something strange. His magic responded to the girl, and he didn’t understand why. He made a deal with her so that she could stay and he could figure out what had happened. The girl’s name was Phryne.


He was sought out by a member of Unity for help, but they could not agree, so the Unit took what he wanted causing Voodoo to retaliate and attack the Unit.


At one of her trips for Voodoo, the girl met a boy in desperate need of help, and she asked Voodoo to help. He agreed but only at the price of her staying with him for ever. She agreed to this new deal. He helped the boy by stopping his sickness, but his body was stilled marred by the ugly scares of his sickness. The boy is Hamlet (Zombie).


The Unit and Voodoo went to outright war with each other, but Voodoo was the most powerful and could have won had he not needed to save the girl when she made a stupid mistake. The result was that the castle was burned down and with it all the books and magical items. He blamed the girl but though he cursed and screamed he never harmed her, and since she knew she was to blame she accepted his anger. But she had realised something; Voodoo had chosen to save her even when it cost him so much. She knew he was not the horrible beast she had thought of him. True, he was not a good man, but he was not horrible either. He was a vengeful man, and if he didn’t outright kill her for her mistake then there were more to him that she had realised. She saw there was some good in him, and she felt it her price to pay to help him. And if she happened to fall in love with him she would hide it, for she knew a man as scarred as he could never love her in return, for he only loved power and the might it brought him. He needs her love to bring out the best in him though of course he doesn’t realise it yet. I know Phryne might seem weak here, but she is much stronger in mind and body than everyone realises, and she can and will take Voodoo on if she has to for his own good or to stop him from murdering someone.


Hamlet knew he owed a lot to Phryne, so he would help her, and thus Phryne and Hamlet end up going with Voodoo, when he decided to take on Unity and bring them down, and this is what changes when Voodoo meets the other Freaks, because he has to meet them after the Third Fate has met with Henry and after Alva has joined the party for they need to be going after Unity also for Voodoo to join them. Exactly how they meet the others I’m still working on, but I know Voodoo discovered Henry knew things about Unity that he himself did not, and that is the main reason why he stays with the Freaks. The other Freaks fear Voodoo, but they realise they need him, his knowledge, and his powers to succeed.


Khaos removed Voodoo’s memories because he knew the broken man he was would use the powers for destruction and murder, but he hoped removing Voodoo’s pain would make him stronger and even greater. He wanted to see what impact a weak man with powers could have on the world.


Voodoo is not a good man. He has done horrible things, and even when he begins to be good and to make amends, he considers himself a villain.  Voodoo’s story is a story of redemption; a story of love and the power of love to redeem another. He needs Phryne’s love to be the best version of himself possible, and hopefully he realises it before the end of his story...

Hey, Jude, don't let me down
You have found her, now go and get her
Remember to let her into your heart
Then you can start to make it better

These two pictures shows two different sides of him; Jude and Voodoo. Both versions have weaknesses and strengths, and both versions needs more work, but I think he is clear to see they are both the same and very different. 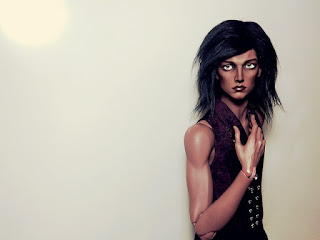 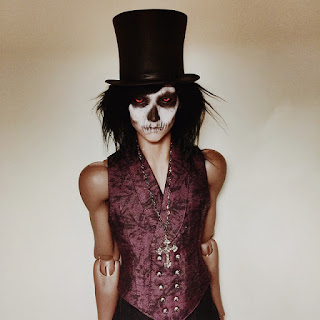