A little story about Sienna (a character).

I've pretty much sold Lorina. I have the deal all made out and the buyer is ready. I just need to finish my exam and then we'll finish the deal. Since I'm getting a lot of money I'm thinking of getting a new doll (and she's not even half the price of what I'm getting for Lorina).

I have this character. Her name is Sienna. She's about 16-18 years old. The second youngest child of the King of Arvik. She has a younger brother, Umber.
The story starts with killings of the King and Queen by a Jafar-ish character (he/she has not been developed yet). Sienna, Umber and their aunt (the King's sister) are on the run. They get out of town (with some help). Both Sienna and Umber have magic and they use it to hide themselves. Sienna's magic is strongest and she is best hidden; You can see her but you want to look away. You don't actually remember that you have seen her. The magic is weaved into her clothes.
They dress as poor people but Umber gives his royal upbringing away. They are caught but believed "only" to be aristocrats. They are on their way to a prison/work camp when the party is attacked by rebels. All the prisoners are brought to their camp. The leader of the camp does not trust Sienna because of the magic. He can easily see that she's disguised. She decides to be honest with him.
Sienna, Umber and the aunt are allowed to stay in the camp for now and they are all presented with work clothes (pants, blouse etc.). When Sienna dress in the new clothes her magic is not hiding her anymore. Sienna is sent to work with Sparrow and Adella (my Elfdoll Ruru sisters) and quickly befriends them.

I think I've decided on a doll for Sienna - a Iplehouse Bibiane on a YID body. The YID body to make her seem younger and not so tall. Later when she grows she can get a SID body. I'm not sure if I should go for NS or PG skin. NS for "royal pale" (as the beginning) or PG for "working in the sun" (at the camp). Probably I go for PG.
Indsendt af HappyCatTaxi kl. 08.12 4 kommentarer:

Today I went to the post office to pick up Kanon. 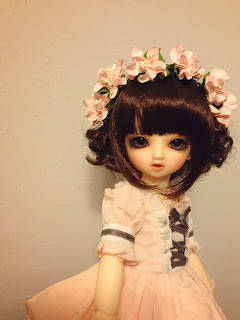 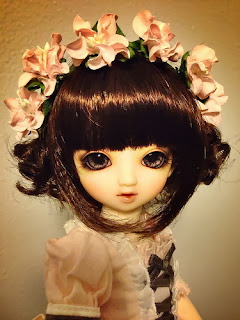 Thinking about expanding my doll family with more boys. After the success of bringing home the Zombie I'm considering getting more boys. I know the boys have to be "special" (as in no "pretty boys"). They need to have something interesting about them; Like the Lati SD boy with the third eye, or Ringdoll Frankenstein.

I'm thinking I wouldn't mind trading the Lorina head for a boy doll. Lorina is beautiful but that's all she is to me, and whenever I see her I think "If I sell her I would get loads of money". Already my Garnet has the role of Pretty Doll With No Character and I don't need two PDWNCs. I'm starting to realize that Lorina does not belong here anymore. Lorina uses 18mm in eyes, her head is huge, and all my other dolls are more realistic. If I could just shrink the Lorina head to fit a YoSD body then I'd be happy (I know there is a YoSD Lorina but the heads are not so very similar. To me YoSD Remi looks more like SD16 Pearl than YoSD Lorina looks like SDGr Lorina).
Indsendt af HappyCatTaxi kl. 11.38 5 kommentarer:

The plans, the ideas, the musings, and the contemplating... or how 2013 turned out for me (speaking of dolls)

(To begin I'd like to say that my "d"-button is jammed and I apologize for any d's left out. Any other letters left out is simply just my bad grammar.)

Because my dear friend Lise made her list of "What happened in 2013" I felt like making one also. 2013 turned out to be a very interesting doll year for me. Some dolls were sold, some bought and some changed character. Only one of my dolls stayed the same - little Yo-Tenshi Yuh as Anne Elliot.

Starting 2013 I had four Volks SD16 girls: Ruby, Garnet, Cristal, and Joanna. Both Cristal and Johanna were sold. Neither really fitted in here. I decided that Ruby and Garnet were ill fitted to be Adella and Sparrow. Looking through doll pictures I was able to convince myself that Elfdoll Ruru NS and Tan would be better. Adella and Sparrow are sisters so to get the same doll in a NS and Tan version would be great (also the fact that I knew they would both fit and match the SD16 body from Volks). It was actually surprisingly easy to find both heads (but that's my super power...)

2013 were also the year I decided to buy a boy doll again. This time I told myself that this was the last time I would have a boy doll (boy dolls just don't seem to fit in here). My last boy would be the Ringdoll Zombie Sol. I had loved him since he came out but I had told myself that he was a no-go (being a boy doll and all). Then one of my friends from Copenhagen sold hers. This was my opportunity! Now he's one of my favorite dolls in my collection! Maybe I like him so because I spend so much time blushing him and making him unique. He's just great :D

I 2013 I got a YoSD Alice also. This was my last try to own a White Skin doll. Alice was sold within 2 months. I don't like to own WS dolls, and I will NOT get a WS doll again. But the Alice/Lorina mold didn't leave me completely, and when I sold my Elfdoll Vivien I really wanted a SDGr Lorina head to replace Vivien. Again the wait to bring her home was short.

I started to think that since my Yo-Tenshi Yuh was such a sweet and dear little girl, then maybe I should get more YOs. I've been wanting a YoSD Anne for a long time (only because we share the name) and when I figured out what character she could fit, I started to look for Anne. Going for one Yo you might as well go for two, right? When Volks had there lottery last month I entered it for a YoSD Kanon. (I'm very proud of myself for not also entering for the SD16 girl or the SDGr girls). I won Kanon and I just got a shipping confirmation now. If I'm lucky she'll be here before Christmas. Volks always declares full value so the stop at customs are usually only for 1 day.