After I sold my Volks Lorina I had a lot of money (and I'm no Scrooge McDuck when it comes to money) so I've order quite a lot of resin; 3 heads and 1 doll.

I ordered a Iplehouse nYID Bibiane PG (I mentioned her before). Then Elfdoll did that discontinuation of all their dolls and I had to grab a few heads in NS; Vivien and Hazy. And yesterday I lost an auction on eBay for a Volks Irvin (a SD13 boy in the ebony skin like Ruby and he could have been great as her brother but someone had to outbid me with 2 seconds left and I had to little time left to bid again myself) so I went on DoA today to look at what's for sale there and I ended up with a Iplehouse Doria Vampire head NS. Not sure what I'll do with the head but I really love the Doria Vampire head so she'll probably go play with my Zombie.

The good thing about the Elfdoll heads and the Doria heads is that I can easily sell them later on if I want. The Elfdoll heads were averagely $55 each, Doria was more but not expensive (I would not pay a lot for a head I could get in the CDS if I wanted).

I really want one more boy doll. I'm just not sure which doll. I really like Ringdoll's dolls but there's not a doll from them I really, really want. Maybe the Carlos doll but I would have loved him in tan but he's only in NS now.

I got new eyes and a new wig for Anne Elliot/Miss Elliot/Annie. I think they are so cute on her.
The eyes are HG Glass eyes from Volks 14mm blue with white.
The wig I think is from Leeke. Looks like Leeke's wig but I got in a trade.
I need at least one more pair of eyes from Volks. Volks release their YoSDs with acrylic eyes and I don't like that.  Probably a brown or grey-ish color for my Kanon, I think.
﻿ 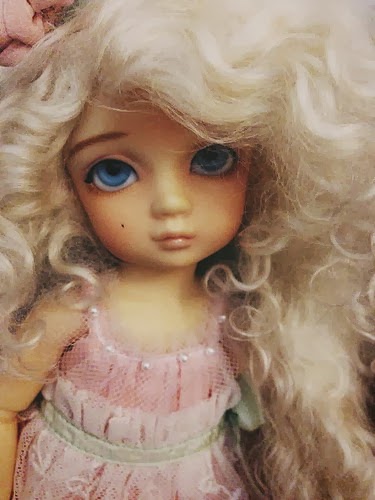