So apparently there are people out there, who seem to enjoy seeing my dolls.

I always imagined it was only me, who liked my dolls, (and my friends because I told them to like my dolls). Lately I've come to realize this belief is wrong; there are actually strangers, who like my dolls!

It started when I found a new group on facebook called BJD Addicts. It's a large group with over 7000 members, so there's a lot pictures and a lot of discussion. It seemed like a nice place, so I posted a "I'm new here and this is one of my dolls"-post there with a picture of Scorpio. That post has over 250 likes and 18 comments. I was (and still am) surprised by the welcome both me and Scorpio got. So I posted a new photo of Voodoo and Scorpio. It wasn't that great a photo actually; no background, bad lighting, Voodoo as a WIP (you can even see the putty holding his eyes in place!), Scorpio looks a bit weird. Still the photo has over 260 likes and 21 comments.
On the Danish site the picture of Voodoo and Scorpio got more than 20 likes and 3 comments, which is also a lot considering we are about 70 members.
Also on Instagram both photos got about 50-60 likes, which is a lot of likes for me.
I'm still amazed by it all.
Also for both photos the comments were positive! I have a fear someone will say something bad about my dolls, because I know it will hurt me. I don't really know how to deal with criticism, so every time I post a picture or a post I get a stomach ache. This is also the reason why I don't post pictures that often.

Of course I love both of these dolls, but I just didn't actually think others did too. I though Scorpio was too strange as a hybrid to be liked by another than me, and I though no one would like a dark tan Venitu, as there are so few of him in that colour.


These are the two pictures:
Scorpio finally got an outfit that I really like. It's from Iplehouse. 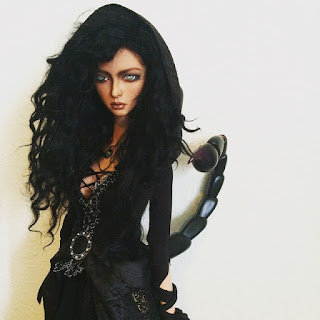 Voodoo's using Nathaniel's hair and pants, but I hope to have his own soon. The vest is new and just perfect to the imagine I have of him, but I need to fix it a bit. I'm starting to fall in love with Voodoo myself :P I'm so happy I panicked and bought Venitu when I did.
Fun fact, Scorpio is actually the tallest of the two (when wearing the Vesuvia resin-shoes), but it fits very well with my characters. 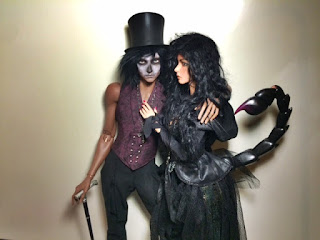