I've changed a few things about Henry (mostly I made him a scholar). This is Henry's story so far...

Henry is very much a gentleman, which is why his nickname is Gentleman (you know me, my dolls from the Freaks universe must have a nickname).

When Henry was young (about 14) he suffered a great loss; his little sister was raped and murdered by her uncle. His parents never recovered from her death, and they slowly gave up on life. As a result Henry was forced to take care of his parents while trying to attend school. It didn't work; Henry wasn't always able to attend school regularly, so his teachers kept failing him. In the end Henry stopped going to school, and stayed home taking care of his parents. But he never gave up on studying and studied on his own.
Studying on his own made him independent and he was a quick learner. He was like a sponge with knowledge, and when he was in his twenties he communicated with other scholars around the word (they assumed he was older than he was because both his knowledge, his way of writing, and his way of addressing people seemed to belong to someone much older).

For the next 10-15 years, Henry took care of his parents. Then they died (natural causes) leaving Henry all alone. He eventually left his childhood home with his books (he was then 30). He wanted to seek out knowledge in the old libraries all over the world.
The Fates decided to put him in the path of Zombie, Voodoo, Scorpio, Medusa, and Cyborg...


This picture shows Henry with no Claw arm, so it's from after he met the other Freaks and they helped him battle his depression. 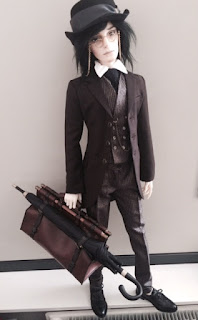