Way back in June I did a shopping list/wish list including a list of dolls that I really, really wanted but they seemed impossible for me to get. One of them was a Fifth Motif Goohwa and another was Dollshe Bermann
Then someone did some magic and Fifth Motif opened for a new ordering periode for Goohwa and Venitu and Dollshe is remaking Bermann... I bought Goohwa right then and there. Bermann might join my family later on. I'm not really convinced about the pictures of the NewBermann head. But let's see. Also I really shouldn't spend all my money on dolls because I want to travel more (I'm considering spending Christmas in Disneyland in Japan).

In the same shopping list I had a "Whispering Grass Thomas head on Dollstown 18y body" written down. I've put him on hold because I'm using Goohwa for that character.


I'm not good at drawing I never much liked drawing on paper but I did a quick drawing of Branimir (Goohwa) that I put up on my wall so I can work on his style. (I ordered Goohwa in Avatar Blue resin).
I have ordered a custom wig from SophyMolly for him because I like her wigs and I was not comfortable to make him a wig on my own and I know exactly what I want. I have ideas for his outfit. It is supposed to be inspired by traditional Asian clothes but have a more modern feel to it. 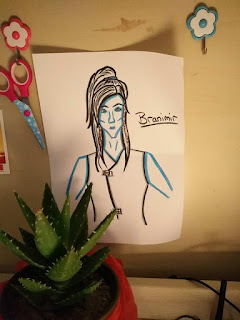