I've participated in this event for the past years. This year I also participated. I ended up using an old photo- I really wanted to use Phryne, but she is not with me in China.

I've always loved Elfdoll Vivien and I've had the her as four different characters, but none of them felt just right, until I came up with Phryne. The trouble with Phryne was that she should be a light tan, tall, feminine, and appear 'scary'.
I had settled for just making her as the human version (before all the trouble with scorpion poison fusing into her DNA), but still I had problems. I wanted a tan Vivien. That does not exist, so I eventually came up with the idea to blush Vivien tan and then hybrid her on a bigger (and already tan) body. I had not heard about Soom making a Vesuvia doll in tan resin, but I don't follow Soom dolls so much because I think their dolls all look the same (I do have a Soom boy though so perhaps I shouldn't complain :P). When I saw a Vesuvia for sale I had to have that body.
Finally, she could come together and she was perfect IMO. It was hard work and a lot of money, but waiting and trying and considering hybrids were time well spent.
To me Phryne proves that there is always a solution to doll-problems. There is no reason to turn to illegal copies and stealing. There really are no excuses to buy recasts. The End. It's not up for discussion.

Here is the picture of Phryne: 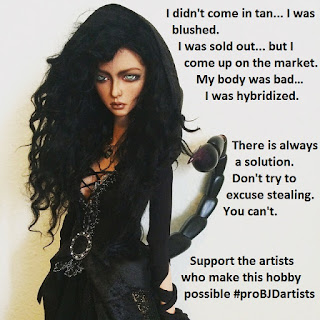