The Gods of Freaksland part 3 (Khaos and Balance)

First my list of ideal dolls for the gods:
Cyril will be the First
Har will be the Second / Diahr
Yakumo will be Khaos
Wally will be Balance
Sumner will by Sky Man
Booth will be Sky Woman

I've been thinking of changing Yakumo to Balance and Wally to Khaos. I think their sculpts might fit better with those characters, but for now it's just an idea. Until I am home again and can work on Yakumo then I probably will not know for sure. Hopefully I can find Wally eventually (or a stand-in doll for him) so I cam compare their faces properly. I can just totally see both Yakumo and Wally as Balance, but I think I can see Wally better as Khaos than I can see Yakumo as Khaos.
For now I will stick to my plan of Yakumo as Khaos and Wally as Balance.

Who are Khaos and Balance?
Khaos and Balance were created when First sacrificed his life to create Earth. They were just little babies that Diahr (Second) took care of. As babies they are not that interesting though they did get into trouble quite often, and some of those stories are a bit funny (imo).
Diahr took a star and broke it into pieces to create Sky Man and Sky Woman, and while he was busy with that Khaos and Balance ate a pieces each. They then become adults.
Khaos took the rest of the star pieces and crushed it up to a fine power, which he spread all over the Earth. Diahr scolded him, and gave him the name of Khaos, because he created much chaos on Earth. Diahr also scolded Balance for not stopping Khaos, and gave him the job to watch Khaos and make sure he did not create too much chaos.
After Sky Man and Sky Woman created the humans, elves, and orcs then Balance created the wizards and Khaos created the trolls.

Balance is watching Khaos, but his main focus lies in wisdom and the power of wisdom . The balance comes from balancing power and wisdom and from balancing the wishes of the supreme ruler and Earth.
He is inspired by Tir in ancient Armenian religion and Menrva from Etruscan religion.
Balance is the god of education, art, the written and the spoken languages, rhetoric, wisdom, war, health, magic, and he is the messenger of Diahr. He can speak on Diahr's behalf when dealing with Earth (as Diahr has given up on Earth). He is de facto in charge of Sky Kingdom, Earth, and everything in between.
He is a very busy god, but he thrives on it. He is usually quiet and peaceful, but Khaos has a way to get under his skin. He loves all the five Dudali species equally, but mostly enjoys watching and helping the writers, poets, musicians, painters, sculptors, and others who use art, languages, and magic to create something new or interesting or beautiful.

In my mind Khaos is the fun uncle that will let us eat pancakes all day. He is not interested in creating chaos as in war and disaster, but chaos like in a big party where he spiked the punch and just leaned back to see what would happen. He is of course the trickster god.
He is not inspired by one specific god, but by the stories I've read about many of them. It is worth remembering he does the things he does for fun and to see what happens. He does nothing to be evil.

How do they look?
I imagine Wally wearing dark/black clothes. I really love this outfit from Loong Soul and if it's still for sale when I can afford it, I might get it. I'm not sure about hairstyle, but I think the color is dark, and I imagine him with very dark eyes. However, I see Balance wearing this outfit and not Khaos (and this is one reason why it is so complicated about Yakumo and Wally as Balance and Khaos) 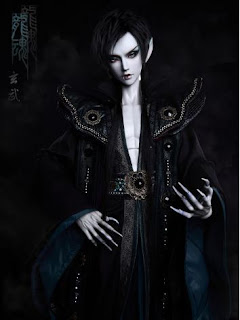 Yakumo's outfit is more colorful, but it's not too colorful. I think purple or blue or both but in subdued colors (if that makes sense). This outfit I think can work both for Balance (as the artistic side) and Khaos (as the fun side). 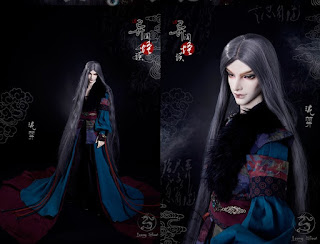